The Secret Libraries of San Francisco 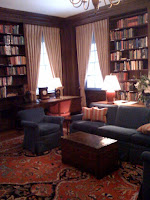 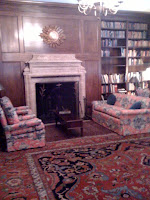 One of the funnest parts of promoting Towers of Gold is getting invitations to beautiful places in the Bay Area. In recent months, I have visited some of San Francisco's private women's clubs, which invariably have spectacular libraries. These photos are from the library at the Francisca Club, a women's club that resides in a beautiful building on Sutter Street. The Francisca Club was started in 1903 during a period of great growth of women's clubs. The role of women in American society had expanded beyond that of motherhood to social service and to good fellowship and cheer. Women banded together to create retreats where they could meet for meals, talk about books and other cultural events, and to hear speakers. Many of these clubs are still going strong today.
I also visited the Metropolitan Club, which is just up the street from the Francisca Club. The club has been doing extensive work to its building, which should ensure it survives another century. The Metropolitan Club was formed for women to pursue athletic, as well as social pursuits. It has a spectacular swimming pool in its basement.
The Sutter Street building was designed by the architect Walter Bliss, the same man who designed Isaias Hellman's summer home in Tahoe, Pine Lodge (now Sugar Pine Point State Park) and the St. Francis Hotel.
The woman who invited me to give a talk at the Metropolitan Club took a look at some of the club's early ledgers. To my surprise (and hers) Hellman's two daughters, Clara Hellman Heller and Florence Hellman Ehrman, were early members, joining in the first decade of the 20th century. The women's clubs are dotted with descendants of the city's early pioneers and it has been really fun to talk San Francisco history with them.
Another private club with a spectacular library is the Town and Country Club which is located in a building on Union Square. The club was started in 1893 as a place for women to rest while shopping. Unlike the Metropolitan and Francisca clubs, which are marked with large awnings, the Town and Country Club does not have any sign. Unless you are looking for it, you would not know it is there.
I attended a luncheon there recently and was astounded when I walked into the library. It is beautiful. The room is lined with floor-to-ceiling bookcases and large comfy chairs to read int. The club's librarian is Lauren John, who also leads book groups around the Bay Area and also serves as a moderator at Book Group Expo each year. The fact that the club has a full-time librarian and one as knowledgable as John shows that it holds books in high regard.
I found this complete description of elite private clubs in the Bay Area on the web. While not all the dates seem right, it does have pictures of the exteriors of the clubs I describe here, plus some interiors of various men's clubs.
Posted by Frances at 10:55 AM

Thanks for the heads-up on all these hidden treasures.

I went to an author event (Janice Cooke Newman's) at the Francisca Club and thought it was wonderful--so cozy and welcoming.

How cool to find Hellman's daughter's in the ledger at the Metropolitan Club.

Hello, and thank you for linking to the article I wrote about exclusive clubs, on the LiveJournal group "Refinement". I envy your access to the Metropolitan, Francisca and T&C's libraries! Many of my favorite places in town are private libraries such as the J. Porter Shaw, the Mechanics Institute and the Henry W. Coil Masonic library at the Grand Lodge of California.

By the way, after reading your description of "Towers of Gold", I was compelled to order a copy from Amazon. I look forward to its arrival and to diving into it.