Trailer for Never Let Me Go by Kazuo Ishiguro

This looks better than the futuristic novel. It stars Academy Award-nominated actresses Keira Knightley and Carey Mulligan. It is scheduled to be released in October.
Posted by Frances at 6:03 PM 1 comment:

In Berkeley, David Sedaris could walk on the stage and grab the audience by just saying “hello.”

In fact, that’s what happened Monday June 14, the opening of Sedaris’ seven-day run at the Berkeley Repertory Theater. From the time Sedaris strode out on the stark stage, dressed in a button down shirt and tie and carrying a folder of papers, he had the audience leaning forward in their seats, gobbling up every word.

The laughs started early and lasted late as Sedaris read selections from his book-in-progress, Squirrel Seeks Chipmunk: A Modest Bestiary, and from his diary.

“I have a book I need to turn in at the end of the month, so that’s what I am doing here,” Sedaris told the sold-out theater. “It is a book of fables, but fables have morals and I don’t.

Sedaris then proceeded to read a number of stories with animal protagonists that were wry and keenly observed, that is, of course, if one believes animals can have human characteristics.

Sedaris started his set by explaining that he had recently bought a vest and was wearing it at an airport in Wisconsin when a gruff, older worker for the Transportation Security Administration ordered him to remove it. He was piqued by her request, he said, so he decided to turn her into a rabbit and put her in his story.

Let’s say she doesn’t come off particularly well. The rabbit is so power hungry he (she becomes a he in the story) chews off the magical golden horn of a unicorn just to prove a point.

Sedaris has to turn in his book at the end of the month, so he is on a small road show to refine the stories. He was just in Chicago at the Steppenwolf Theater before coming to Berkeley.

Ian Falconer of Olivia fame will illustrate the fables. Dame Judi Dench and comedian Elaine Stritch will be doing a recording of the book, a prospect which seems to be making Sedaris a bit nervous.

“I just want to make sure that by the time it gets into her (Stritch’s) hands there is not a lot of fat,” said Sedaris. “I just wanted to make it as good as it can be. I just hate the idea of her wasting her breath.”

It says volumes for Sedaris’ popularity that even though he is presenting a work in progress, tickets for his readings/act sell out almost immediately. Tickets for the Berkeley Rep show were snatched up in hours.

Sedaris edits and makes corrections as he reads in front of a live audience, he said.

“I’m editing as I’m talking,” Sedaris said during a Q & A session at the end of the show. “Sometimes I read and I get an idea and I think this might fix things. Sometimes I just hear myself and I think I am embarrassed to have read that, or yes, that sounds just right.”

A few tidbits gleaned from the evening:

• Sedaris now lives in England, not Paris
• He swims for exercise
• He has moved around so much, he no longer thinks of himself as a North Carolinian
• He doesn’t like people eating or drinking in the audience
• He doesn’t like to have his picture taken
Posted by Frances at 7:04 AM No comments:

You don't have to give up your typewriter

The pleasures of typing united with the ease of the computer. (via Galleycat)
Posted by Frances at 6:51 AM No comments:

The Agony and Ecstacy of Book Reviews (set to thumping music)

How does a writer survive a bad review?

Thanks to Meg Waite Clayton for tipping me off to this.
Posted by Frances at 5:37 PM 1 comment: 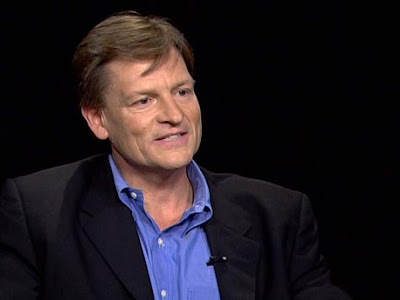 From the moment Michael Lewis' new book, The Big Short, came out in April, it struck a nerve, It sold an astonishing sold 162,000 copies in its first month.
But now there’s news that the book has captured the attention of our country’s lawmakers.According to a story on the website Politico, The Big Short has been mentioned at least 15 times in the hallowed halls of Congress -- on the Senate floor, in committee meetings, and in press conferences.
Dick Durbin, the Senate Majority Whip, stopped pontificating during a discussion on regulatory reform to recommend the book to his colleagues.
“I’m going to plug a book: Michael Lewis’s ‘The Big Short,’” he said.
Senators Chris Dodd and Harry Reid also gave the book a shout out during Senate debates.
And its not just Democrats. According to Politico, lawmakers on both sides of the aisle are quoting from the book.  Republican Senators John Ensign of Nevada and Kit Bond of Missouri have mentioned the book.
Lewis met with House Republicans in the fall to talk about the financial crisis. He was so well-received that meeting turned into a three-hour Q and A session. Then Bay Area Congresswoman Jackie Speier asked him in May to address the House Democratic Caucus. Since then, Lewis has been getting phone calls at his Berkeley home from house staffers with questions about the meltdown.
Lewis, who has finished his book tour and is back in Berkeley, finds all this attention a bit unnerving.
“When senators are reading your book, it reaffirms your faith in society, on the one hand,” he told Politico, “and, on the other hand, it makes you nervous, because I don’t think of myself as advising people who are actually going to change things.”
Posted by Frances at 4:45 PM 3 comments: