What Race Means in America

I heard Bliss Broyard on Fresh Air on Thursday, talking about her book, One Drop, which discusses her father’s decision to spend his life as a white man, rather than as the black man he was born.

Broyard’s father was no ordinary man, but was Anotole Broyard, the book critic for the New York Times and a writer of strength and wit in his own right. In his two memoirs, Kafka Was the Rage, detailing his days as a bachelor in after World War II, and Intoxicated By My Illness, focusing on his upcoming death from prostate cancer, he never reveals that he has some black blood.

He never told his children, either. His wife revealed that salient fact to them as Broyard lay dying.

There were always rumors about Broyard’s identity, and he was ultimately “outed” by Henry Louis Gates, the Harvard scholar, in a mesmerizing article in the New Yorker, which you can read here.

I am fascinated by books which explore how Americans are not what they think they are. Edward Ball’s book, Slaves in the Family, looks at his ancestors and their long legacy of owning slaves. In his upcoming book, The Genetic Strand, he dissects his family’s genetic code to see whether he has any African-American or Native American blood.

Another fabulous book on race in is Neil Henry’s ’s Secret. Henry is a descendant of a white plantation owner and a black slave, and his book traces two branches of the family, one white, one black. He finds that the black descendants of the original couple have done much better in than their white counterparts. In the course of his research, which takes him to archives and dusty municipal buildings all over the South, Henry is confronted with race and what it means to be black in .

I don’t have any indication that my ancestry is anything but Jewish, German, Irish, Scotch, etc. One daughter of mine has very dark skin, however, and people are endlessly asking her ancestry. Perhaps there is a drop of gypsy blood along the line. Who knows?

But the question of origin interests me, since racial identity plays such a critical role in American history.

Carmel Authors and Ideas Festival and Other Musings

A number of people have told me that they saw the announcement of my talk at the too late to attend. They saw it too late because they are checking my blog less often, now that I am posting less often.
I guess I am in kind of a lull. I am working hard on my book and that consumes a lot of my energy. I keep seeing events that I think I should blog about, or read books on which I should offer commentary, but somehow I put it off.
But I will be going to the Carmel Authors and Ideas Festival this weekend, and plan to take lots of pictures of all the glamorous authors and participants. I promise I will post them.
This is the festival that was literally thrown together in a few months by Jim and Cindy McGillen of . Despite the short timetable, the organizers have lined up a fabulous set of speakers, including Seymour Hersh, Doris Kearns Goodwin, Douglas Brinkley, Elizabeth Edwards, Frank McCourt, and John Grogan.
Bay Area authors also will be well represented. I am going as a guest of Julia Flynn Siler. Other authors include Tamim Answary, Jason Roberts, Kemble Scott, Beth Lisick, and Lolly Winston, among many others.

The Interstection of Journalism and History 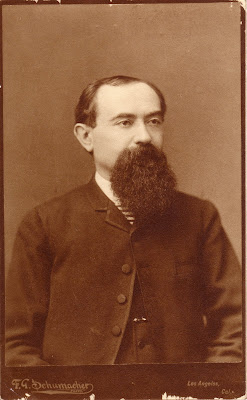 I am going to be talking at the Judah L. Magnes Museum on Thursday September 20 about the intersection of journalism and history. In writing my biography of Isaias W. Hellman, I have used the archives of the Western Jewish History Center, an incredible repository of photos, letters, diaries, and newspapers detailing the Jewish contribution to the settling of the West.

I am going to talk about combining a variety of sources to write historical narrative. Normally in journalism, a reporter goes out and interviews people about a topic, reads the literature, observes the scene and then writes up a report.

But recreating history is not so neat. Generally there is no one to interview and you can't observe the scene first hand. So you have to hunt for clues in old newspapers, letters, photographs, etc. I will be talking about how to mine primary sources to write narrative. I will also be talking about Hellman and the Jewish experience in California in the 19th and 20th centuries.

They Called Me Meyer July

When Meyer Kirshenblatt was 17 years old, he left his home in Apt, Poland for Canada, little realizing he would never see the town again. He grew up in a Jewish community rich with tradition and religion and that way of life -- and most of the inhabitants -- were killed during the Holocaust.

Kirshenblatt lived a full, happy life in Toronto and it wasn't until he was 71 years old that the press of his childhood memories prompted him to start painting scenes of his youth. Now 20 years later, the Judah L. Magnes Museum in Berkeley is putting on an exhibit of 65 of his paintings, titled They Called Me Meyer July: Painted Memories of a Jewish Childhood in Poland Before the Holocaust. It's an amazing show of scenes of shtetl life, done in bursts of color and dotted with humor. It's the first time the paintings have been exhibited and when they leave the Magnes in January, they will travel to museums around the world.

Kirshenblatt and his daughter, the renowned scholar Barbara Kirshenblatt-Gimblett, have also written a beautiful memoir about pre-Holocaust Apt, looking at Meyer's life, his painting, and their intellectual collaboration. The book, published by UC Press, got a starred review in Publishers' Weekly.

Kirshenblatt-Gimblett and her father were at the Magnes opening on Sunday, and she said something I found provocative and true: that these paintings are "memory as a weapon against the traumas of history."
Posted by Frances at 12:11 PM No comments:

Labels: They Called Me Meyer July

Who is the Most Popular Author At Google? A number of my friends have been lucky enough to be tapped as Google Authors – you know, the writers who get to take a trip to Google headquarters in or or and talk to Google workers while they snack on Google-prepared lunches. Oh, yes. Google buys a bunch of their books and then passes them out to those attending the talk.

I first heard of the Google Authors program when Pamela Mazzola and Nancy Oakes, authors of the gorgeous cookbook, Boulevard, visited the campus in 2005. Since then the program has become well known, with write ups in various newspapers. A few other friends, Neil MacFarquhar, who wrote The Sand Café, and Julia Flynn Siler, who wrote The House of Mondavi, have also been tapped.

Google does more than pass out an author’s books. The company also films the author’s talk and posts it to YouTube, creating one of the most vibrant libraries of literary lectures around.

So guess who are the most favorite authors, as judged by the number of times their videos have been viewed? It’s an eclectic list.

1) Christopher Hitchens, author of God is Not Great. His video has been viewed 25,536 times. (In just two months!)

6) Elizabeth Gilbert’s video has been looked at 6,322 times.

I will confess I have never heard of some of these authors. Randi is a magician, Vanrenen is the editor of the anthology Generation What? Dispatches from the Quarter-Life Crisis. Andrew Keen is the author of The Cult of the Amateur.

The author viewings pale compared to viewings of political candidates.

4) John Edwards has less traction. His video has been looked at 7,997 times.

Posted by Frances at 9:23 AM No comments:

Harper Lee Won't Talk to You. What Do You Do Now?

The biographer James McGrath Morris has started a new monthly on-line newsletter, and his September issue is a gem.

In it, Charles J. Shields describes walking to meet various publishers to discuss his just-submitted proposal for a biography of Harper Lee, the reclusive author of To Kill a Mockingbird.

“My agent Jeff Kleinman at Folio Literary Management sent my book proposal to about a dozen publishers,” Shieeds recounted in The Biographer’s Craft. “We were excited when several editors said they'd like to meet me and discuss the idea. I remember we were walking down Seventh Avenue in when Jeff's cell phone rang.

I could tell right away by his expression that something was wrong.

Someone--a mole in publishing (though I prefer to think of the person as a wart)--had copied my entire proposal and sent it by Fedex to Lee. As Jeff and I were blithely meeting with editors, she was already feeling grateful that some thoughtful soul had tipped her off, and by God she wasn't going to cooperate with me. Or, as she so often responds to requests from journalists, "Hell, no!" In fact, she had started calling friends and asking them not to speak to me. I was thunderstruck and Jeff, in his endearing way, began to worry (he wouldn't feel right if he wasn't worried about something) that the whole project was blowing up.

What I had planned to do before we were double-crossed was this: first, I would get a reputable publisher for the book, and then I would contact Lee. I would tell her that accuracy and fairness were my biggest concerns. I would explain that I wanted to work with her, and would even send her the completed manuscript for corrections. Keep in mind that this is chancy. Whenever you write a biography of a living person and permit him or her to read the manuscript, you run the risk of having it filleted. Result: a hagiography, to use an old-fashioned word, a biography that treats its subject with undue reverence because all the juicy parts have been removed. Still, I thought a biography of the mysterious Harper Lee, author of one of the most popular books of the twentieth century was worth the chance.

I never got the opportunity to work with her. She cut me dead. Never heard from her, only from her sister, Alice Lee, a lady in her nineties, who said imperiously that she was not pleased that I was writing about her sister."

Fortunately, Shields was tenacious, as his book, Mockingbird, was widely admired and won all sorts of awards.

The issue also contains an interview with Janet Malcom, who just wrote a biography of Gertrude Stein and Alice B. Toklas, focusing on their years under Nazi occupation.