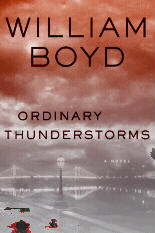 Every since I read Any Human Heart I have been a fan of William Boyd's. It's the story of one man's life, and at the same time the story of the British Empire in the 20th century. The main character, Logan Gonzago Mountstuar, is a writer and his life interesects with Virginia Woolf and the Bloomsbury set, the Spanish Civil War, the glory days of Paris, and much more. The book is written in diary form and purports to be Mountstuar's autobiography.


Restless came next and I was amazed at how different it was from Any Human Heart.It was a spy thriller set in Europe in World War II. But the more I learned about Boyd, I realized that was his talent as a writer. His books are all completely different from one another.

I was really excited to get an advance copy of his newest novel, Ordinary Thunderstorms. Unfortunately, I did not like it. It, too, is a take on a genre -- the innocent man done wrong who must confront the big, bad corporation -- genre. You know, a book like those written by John Grisham.

It opens with Adam Kindred, a climatologist who comes to London to interview for a job. He is Australian by birth and recently lost a plum academic assignment in the US because he had a fling with one of his students. (And his wronged wife's family donates generously to the school, hastening his exit.) Kindred goes to eat dinner after the interview, strikes up a casual conversation with a fellow diner, and returns a file the diner inadvertantly left at the restaurant. When Kindred arrives at the apartment, he finds the diner (who is really a doctor researching a new asthma drug for a pharmaceutical company) with a knife stuck in his abdomen. Kindred stupidly takes it out, thus putting his fingerprints all over it. He hears a noise in the apartment. The killer! He flees and soon he his being chased by both the police and the killer. Oh, and also by the big bad pharmaceutical company. See, the dead man is really a doctor who has discovered that the miracle asthma drug the company is developing has killed 14 children in clinical trials.

Kindred has to disappear completely and Ordinary Thunderstorms is a reflection, in part, on just how a person can sever all links to a past life. Kindred ditches his credit and bank cards, his mobile phone, and his identification. He sleeps on a fogotten patch of ground near the Thames, begs by day, and eats roasted seagull by night. He visits the soup kitchen of a local church and bathes in the bathrooms of train stations.

Ron Charles of the Washington Post liked this book a lot and argues that the over the top, hackkneyed first chapter is a deliberate act by Boyd. Charles says the book gets better along the way. I agree. The book does get better, but its stereotypical depiction of big bad business seems predictable and tired. Boyd does create compelling characters, particularly a young prostitute and her son who befriend Kindred, but overall I would say skip this one. Dinitia Smith sort of says the same thing in the Barnes and Noble review. Which is okay, because Boyd has such a rich backlist. I think I will go read some of his earlier books.
Posted by Frances at 8:01 AM

(Diane) Bibliophile By the Sea said...

Frances, your honest review was terrific. I have this book but have not read it. I hope to read Brazzville Beach by this author first.