The Best Books of 2006 according to The New York Times

The New York Times has posted its list of the Top Ten Books of 2006. I am very glad to see that ’s Book, The Omnivore’s Dilemma, is one of the non-fiction books on the list. I thought this was a radicalizing, change-your life, kind of book written in a most interesting manner, and obviously thousands of others agree. The book was a bestseller for months. I think it may even win Pollan the Pulitzer Prize.

It’s actually an intriguing list. They named Marisha Pessl’s book, Special Topics in Calamity Physics, as one of the best fiction books. (This was one of the books I took out of the library, read the first 100 pages, and returned. The first chapter was captivating, but I couldn’t get into the rest. I also had more pressing work-related books to read and the due date loomed faster than I expected.) This is a first time novelist, a very lovely young woman, and while she is a fine writer I think the choice is not evident. I don’t agree with the selection but it is refreshing to have younger writers represented.

I haven’t read any of the other books, although I have The Looming Tower out from the library and it was due yesterday. Another missed opportunity.

But I definitely will make a point to try and get to these other books. The New York Times imprimatur counts for everything in a certain part of the reading world. It’s definitely how I select gift books. Many lit bloggers hate the Times book review and its selections and its reviewers, but I am not one of those.

"I am a bit tipsy on champange as I write this (so please forgive the slurs and egregiously incorrect spelling) but I have recently learned that my book has been named one of the best ten books of 2006 by the New York Times Book Review! Am I dreaming?"

If you want to read dissenting views, definitely check out Ed Champion’s take on the book review.

Absurdistan, by Gary Shteyngart
The Collected Stories of Amy Hempel
The Emperor's Children, by Claire Messud
The Lay of the Land, by Richard Ford
Special Topics in Calamity Physics, by Marisha Pessl
Falling Through the Earth, by Danielle Trussoni
The Looming Tower, by Lawrence Wright
Mayflower, by Nathaniel Philbrick
The Omnivore's Dilemma, by
The Places In Between, by Rory Stewart

Posted by Frances at 9:24 AM No comments: 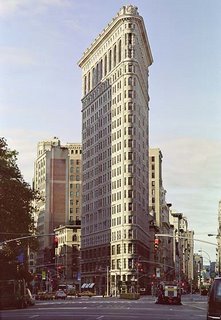 I just took a quick six-day Thanksgiving visit to . Not much book news to report, but there were lots of interesting things I saw:

There are two dominant styles in evidence on women all over . One is to wear straight-legged jeans and tuck them into boots with fur trim. The other is to wear a mini, mini skirt over dark black leggings and boots. May I acknowledge that neither style works for me.

The Daily News and The Post are still in hand-to-hand combat. Each day they try and outdo one another with provocative headlines. The recent police killing of a man just hours before his wedding provoked shock and outrage in New York’s black community and those feelings were splashed all over the front pages.

The weather was better all week in than in : mild and mostly sunny,

I didn’t have a book for the airplane so I ducked into this adorable books store on Madison Avenue and called The Corner Bookstore. It is small, with hand-selected literary and high-brow non-fiction titles. All the big fall books are out and I can’t say I found any I was eager to buy. I was most attracted to Decca, the letters of Jessica Mitford, but not for $35. What did I buy instead? Wendy Wasserstein's latest, Elements of Style. I figured it was chick lit and would be easy to read on the plane. I figured wrong.

The hottest clothing store in is called Uniqlo. It’s a Japanese version of the Gap with prices like H & M. Very clean lines, lots of maple and glass. There are hundreds of these stores in and the first one opened on Broadway in on Nov. 10.

I have a new editor at ’s Press. I get a thrill every time I go to visit the publisher because its offices are in the historic . I walk in and wonder just who has paced those hallways.

The Christmas windows at Macy’s were better than those at . At least I think so. The sidewalks were so crowded I could barely see. That’s at the holidays for you.

My friend Monica gave a baby shower last week for Laura Bennett, one of the finalists in the recent Project Runway. Laura is about to have her sixth son and all the women dressed up in red wigs and black clothes in imitation of her. All the party favors were still hanging around Monica's house, so my daughters got to pretend they were there. We brought a bunch of blue gum cigars home with us.

When I first started to read Daniel Mendelsohn’s The Lost: A Search for Six of Six Million, I felt incredibly frustrated. It wandered all over the place. No sooner would Mendelsohn start a riff on the history of his grandfather, who emigrated from a small town called Bolechow in Eastern Europe to the , then he would digress into another topic. And as soon as I was comfortably ensconced in that subject, Mendelsohn would switch gears again. It was all fits and starts. There was no forward momentum.

But gradually I began to see what Mendelsohn was doing, and I now recognize its brilliance. The Lost tells the story of Mendelsohn’s great-uncle Schmiel Jager, who, who along with his wife and four daughters, was killed by the Nazis during World War II. Mendelsohn grew up on Long Island hearing about Schmiel’s death, but no one in the family knew the particulars. So he set out on a quest to find out the details, a search that led him not only to the , , , and , but to ask larger questions about the nature of good and evil, death and survival. How does one come to terms with the Holocaust, which killed so many? By focusing on the sheer numbers killed, or on the details of a handful who lost their lives?

A central figure in “The Lost,” is Mendelsohn’s grandfather who used to spin yarns about the olden days for his grandson, "in vast circling loops, so that each incident, each character...has its own mini-history, a story within a story." These were stories told in a particular, circular fashion, where forward narrative was interrupted for history and explanation.

It is this pattern that Mendelsohn recreates in his book with his fits-and-starts. Many critics have lauded this circular storytelling, with roots in the Odyssey and the Bible. As Gideon Lewis-Kraus wrote in The Nation, “The Lost calls to mind a typesetter's drawer full of parentheses: a deposit of endings and beginnings.”

But I was struck by something different: Mendelsohn’s writing style also recreates a journey, that of genealogical research. For anyone who has ever tried to find out about the lives and homes of long-dead relatives, you know the search comes in tiny, parallel, increments. You find out one small detail and it may be the only information you know for months on end. Then you discover another little clue, information so incidental it seems unimportant, yet it propels your knowledge forward. It takes dozens of those sideways movements to gain a clearer picture of a life.

The Lost is Mendelsohn’s description of this back and forth research. Sometimes you can’t believe he is writing this mundane stuff. He spends pages of trying to discover if one relative was pregnant when she died, and was it by her Polish, non-Jewish lover? One survivor described that cousin as “easy.” Did that mean she had loose morals – as suggested by her out-of-wedlock pregnancy, or did it refer to her fun-loving temperament? Alternatively, he spends time trying to figure out whether another great uncle emigrated to because his wife was an ardent Zionist or because he was shamed into leaving by his community for selling non-kosher beef. Mendelsohn’s explorations of these topics inch along, and at times the book feels like a view into the efforts of an amateur historian.

Part way through the book, though, I realized Mendelsohn was doing this deliberately. He replicates the rhythm of genealogical research – the back and forth, sideways to sideways, mundane to mundane. Yet, like genealogical research, the accumulation of tiny facts in the book makes a bigger whole – and in the case of The Lost, a fabulous, moving account of wrestling with family history.

By moving along so slowly, and in a circular fashion, Mendelsohn makes the reader care about his particular family, and by extension to what was lost by the Nazi’s actions. This book is not a catalogue of grim catastrophe, although Mendelsohn does include ample description of the Nazi Aktions that killed most of the Jews of Bolechow. It is an accumulation of details, of decisions made spontaneously or not, that led some to live and others to die. By focusing on the small, Mendelsohn helps the reader see the vast.