What Lengths Would You Go for a Book? Would You Steal? 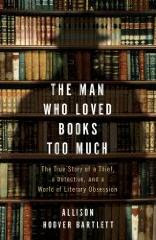 John Gilkey has an aspiration for his life: to own a first edition of every book on Modern Library’s list of Top 100 novels.

The trouble is that Gilkey has no intention of buying any of these books, which include writings by authors F. Scott Fitzgerald, James Joyce, Vladimir Nabakov, Virginia Woolf, and more.

Instead, he has tried to acquire them in another way: through theft. It’s a journey that has let Gilkey “own” many modern masterpieces – but has also sent him to jail for extended periods of time.

In her fascinating new book, The Man Who Loved Books Too Much: The True Story of a Thief, a Detective and a World of Literary Obsession, San Francisco writer Allison Hoover Bartlett has told the tale of unrepentant book thief John Gilkey and the rare book dealer who chased him down. The cat-and-mouse game is played out against the backdrop of antiquarian book fairs in San Francisco and New York, featuring manuscripts worth thousands of dollars and book collectors who will go to any length to possess a particular tome.

I concur. I gobbled up the book in less than 48 hours, swept away by Bartlett’s taut narrative that has book dealer Ken Saunders chasing an elusive Gilkey, who grew up in Modesto, and who has a sketchy work history but a stunning criminal resume.

The Man Who Loved Books Too Much will be published Sept. 17, but I have five galleys to give away. Just email me at FDinkelspiel@gmail.com if you are interested in the book. Tell me a bit about your favorite book to help me choose the winners.

In one riveting scene, Bartlett describes standing outside 49 Geary Street in San Francisco with Gilkey on a bright September morning in 2005 as he explained his philosophy of “book collecting” to her. The building was once the West Coast headquarters of Western Union, but it now houses more than 20 art galleries as well as three antiquarian book stores. Gilkey has filched a copy of The Mayor of Casterbridge, by Thomas Hardy from one of the stores, Brick Row Book Shop, and wanted to give Bartlett a tour, almost as if he was the proud owner of this store.

“I was still wary, but too curious to walk away from an opportunity to see Gilkey in his element,” writes Bartlett. “What sort of person returns to the scene of his crime?”

What kind of person does that? Part of what makes The Man Who Loved Books Too Much so fascinating is how Bartlett tries to get inside Gilkey’s mind to understand what drives him to steal rare books – which he generally doesn’t read – and how he feels absolutely no guilt about his crimes.

Read it yourself to find out more.
Posted by Frances at 8:30 AM No comments:

Labels: Allison Hoover Bartlett, The Man Who Loved Books Too Much

is about to get a new general interest bookstore.

Books, Inc announced Aug. 5 that it will open its twelfth branch on in in mid-October. The new 4,000 square foot store will carry lots of fiction, children's titles, and cookbooks for all the foodies wandering the street. (Unfortunately the news came at the same time that chef Christopher Lee announced he would be closing Eccolo, the restaurant that was so instrumental in helping Novella Carpenter, the author of , feed her pigs)

Michael Tucker, the CEO, said the new store is at “right location, the right lease and the right landlord for allowing expansion in this challenging economic climate.”

It will be interesting to see if Books, Inc can be successful on a street that was not profitable for the venerable Cody’s Books, which shuttered its outlet in early 2008.

The independent bookstore chain has roots reaching back to the Gold Rush.

Posted by Frances at 8:25 AM No comments:

Tidbits from the Squaw valley Community of Writers Conference

So I am up at the Squaw Valley Community of Writers Conference, the land of so many dreams. This is the place were aspiring writers come to workshop their short stories, novel excerpts and essay. They listen to the encouraging/discouraging words of editors, publishers, agents and other writers. Some of the big names this year include Michael Pietsch, publisher of Little Brown, Jack Shoemaker, longtime publishers of many imprints, authors Amy Tan, Dorothy Allison, Diane Johnson, Lynn Freed, Janet Fitch, Mark Childress, Jason Roberts, Rick Wartzman, Molly Gilles, and many more.

A few things heard or overheard:

On the demise of book criticism and book reviews, from author Alan Cheuse (after he lambasted the Washington Post for shutting down its stand along book review section) “We’re in a horrendous moment for American writers. It is so difficult to get attention for a book for someone who doesn’t have name recognition … and even for people with name recognition”

Lynn Freed: Most book reviews are book reports and are boring. She wants reviews to have opinions, to put books in broader context of writer’s work as well as the work of other authors. She and others agreed that reviewers are often writers and are reluctant to criticize one another's work.

(At which point I thought to myself: try doing all that contextual work when some places only pay $50 for a review)

The panel was short of discussion on the on-line chatter about books. In fact, the entire conference is missing a vibrant dialogue about the future of books, ebooks, blogs, Facebook, Twitter, etc. It is a conference that really focuses on writing rather than publishing.

Golomb: Unfortunately publishers are now asking about an author’s platform, which they expect to be as high as a skyscraper, even when it is a debut novel.

A participant asked what the agents thought of the online personality of Ms. Snark. None of them had heard of her. (I informed the questioner that it was agent Janet Reid)

Also overheard: staff writer talking with someone whose manuscript he had critiques that day in class and setting up an extra session to discuss it with her.

Dorothy Allison read an except from a story that is out in the summer issue of Tin House. It concerned a young man named Jason who dreams of fame. Allison has lived in west on and off for ten years and says she is just now publishing stories about the area. This may be because Allison often writes as many as 18 drafts of a story.

If you live in the Bay Area, or are a bluegrass fan, you have certainly heard of Hardly Strictly Bluegrass, the 3-day free music festival that financier Warren Hellman puts on in Golden Gate Park.

Between 500,000 and 750,000 people come each year to bask in the sun (or fog) and listen to fantastic music. Emmylou Harris, Hazel Dickens, Steve Earle, Ralph Stanley and the Clinch Mountain Boys, Gillian Welch, and many more are regulars.

This year Marianne Faithful and Lyle Lovett will join around 75 other musical guests.

Well, the festival keeps growing, and Warren Hellman and Dawn Holliday, who organizes the festival, decided to add a sixth stage to the event. And guess what they are going to call it? (Hint:Warren is my cousin.)

Towers of Gold .... after my book of the same name.

When Warren told me this I couldn't believe it. I know he got some flack because the other stages have simpler, folksy names like Arrow and Banjo stage. But when I published the book, Warren and I vowed to have fun together with the project. (He encouraged me to write it, since it is about our mutual ancestor, Isaias Hellman.) We were on the radio together on Michael Krasny's show on KQED. He wrote a song about Isaias, which he plays with his band. The Wronglers, and which I promote on my website. I dedicated the book to him.

So you see, it's been a lot of fun and he decided to continue the fun by honoring Isaias Hellman at the festival. The graphic and banner for the stage is above. That is Isaias Hellman on the coins.

San Francisco Chronicle columnist Leah Garchick wrote about this and this is what she said:

I am so delighted by this. I love HSB and usually go for at least 2 of the 3 days. Now the concert will resonate with me even more deeply.

Posted by Frances at 6:16 PM No comments:

I am heading back to Lake Tahoe tomorrow to do a bookstore book signing and a few appearances at the Squaw Valley Community of Writers.

The Community of Writers has a nice tradition: it invites alumni who have published books to come back and read. It's a way to showcase the work of people who have gone through the writing program and also show those still aspiring to publish that it can be done. The organizer of the conference, Brett Hall Jones, tries to make sure there is a good turnout by offering free food.

I will be talking at 1:15 pm Wednesday at the Olympic Village Inn along with others alums, including Tanya Egan Gibson, Jamie Lee Ford, Vicki Forman, and David Bajo.

On Thursday at 2 pm, I will be on a panel called Using Historical Record to Create Scene, with Jason Roberts, Glen David Gould, and Sandra Scofield. Rick Wartzman will moderate.

As soon as I finish that panel, I will rush to Bookshelf at the Boatworks, the last independent bookstore in Tahoe City. I will be doing a signing there at 4 pm.

I have been attending the Squaw Valley Community of Writers on and off, as a participant and as a visitor, since 2003. It's a wonderful workshop and a wonderful organization. I always feel that its philosophy is to connect accomplished writers with aspiring writers and to show that they are the same .... just at different places on a continuum. Before I published, I found this attitude encouraging and inspiring.
Posted by Frances at 6:05 PM No comments: