A Fierce Radiance by Lauren Belfer 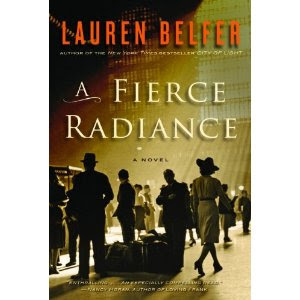 When Lauren Belfer's City of Light came out, I devoured it. I don't generally adore historical novels, but this one about Niagara Falls and the building of an electrical system hooked me from the start. So when I heard that her new novel, A Fierce Radiance, was about the discovery of penicillin, I rushed to my library and put it on reserve.

Unfortunately, I wish I didn't move that fast. Belfer's second novel is not nearly as good as her first. It tells the story of a female photographer from Life Magazine who goes to the Rockefeller Institute in NYC to photograph human tests of penicillin. It then goes on to talk about how the federal government commandeered research and production of the drug during World War II, but strictly limited its use to soldiers. The pharmacy companies were required by law to produce the drug and sell it cheaply, but they conspired to create similar drugs which they later patented and made money on.

The back story is good. It's just that Belfer inserts clunky dialogue and far-fetched situations to tell the story. I found myself cringing at her writing at times.

Still, I did not know anything about the medical quest to prove penicillin and produce it on a large scale, and A Fierce Radiance told me that story.

Posted by Frances at 8:47 AM No comments: