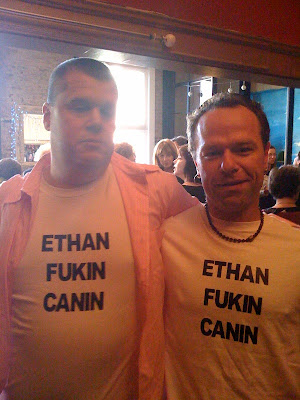 It might have been the margaritas, or the fact that Daniel Handler and Stephen Elliot were wandering around the room wearing t-shirts that read “Ethan Fukin Canin,” but Tuesday night’s benefit for Litquake was an evening of good cheer and fascinating discourse on literature.

The heart of the evening was a fascinating discussion between Canin, who spent his teenage years in San Francisco, and Oscar Villalon, the former editor of the San Francisco Chronicle Book Review. 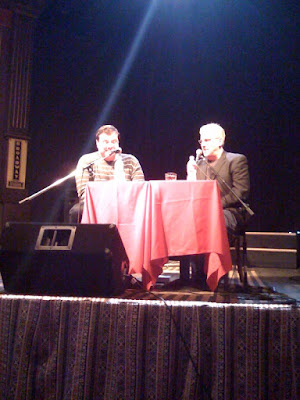 teele, now internationally known for her women’s novels. The implication was how did a romance novelist teach anything to a man who has become one of America’s most respected literary novelists. But Canin’s answer was a surprise and not at all snarky. When Steele taught Canin English teacher at University High School, she had written one book, Passion’s Promise, and was making ends meet by teaching. Canin thought she was a glamorous older woman (She was all of 24) who wore mink stoles to school. (Full disclosure: Steele’s first husband was my cousin Claude-Eric Lazard. My stepsister was in the same class at University as Canin and did not get along with Steele.)

But Steele taught her students valuable tips on how to be a writer, most notably the need to write every day. She backed up her advice by requiring her students to write something five times a week – which meant she had all those papers to correct. Canin, now a professor at the University of Iowa writing program, expressed admiration for Steele’s willingness to grade so many papers. That took dedication

“She was a phenomenal teacher,” he said.


Canin didn’t set out to become a writer. He was a mechanical engineering major at Stanford until he picked up a set of stories by John Cheever. He was captivated by his language, that certain syllables and stresses could produce emotion. Canin was so taken by Cheever’s writing that he typed out and parsed his paragraphs over and over again to understand how they were put together. Cheever’s words became to feel like Canin’s words and the experience sent him on a new path.

By the age of 27, Canin was a literary golden boy. His book of short stories, the Emperor of the Air, was critically acclaimed and he had won the Houghton Mifflin Literary Award.

But the harsh reality of the world is that one book is not enough. There’s always the expectation of another one. “It’s quite a tough life, it’s not an easy life,” Canin said. “But I probably wouldn’t switch it for anything … I get to wear jeans everyday.”

“Part of what you learn when you become a writer is that the field is always changing. They don’t tell you when you write your first book that you have to write more. You think you have gotten over this big hill, but you have to (do more) and learn to be a writer.”

The key is discipline. Writing regularly and within restraints, he said. Canin writes every week day in his office and never on weekends. And he spends a lot of time gardening and woodworking because those are activities that require a different kind of thinking.

He also thinks absolutely freedom in writing is harder than writing within constraints. “Freedom is the enemy of invention.” When he lets his students write about anything, many of them balk. When he sets specific parameters, like asking them to write about visiting their parents’ house right after their death, or going to Africa, the students are liberated to be more creative.

Canin said he is fascinated by class and power, and his novel America America is his attempt to explore how they play out in politics.

Canin has had four of his short stories made into films, and his involvement has been from selling the rights and never hearing anything more until the film came out (The Year of Getting to Know You) to writing the screenplay and spending every day on set. (Beautiful Ohio).

He decided he prefers to stay far away because “a lot of movie making is personality management. At least, while writing is torture, it’s your own torture.”

“The best experience is just to deposit the check and let them make the movie.”

Fifteen years ago when Canin was still living in San Francisco, he started the Writers Grotto with Po Bronson, Ethan Watters, Josh Kornbluth, and others. He still stays connected to those friends. Many of his former students as well as some of his classmates from University High, attended the Tuesday evening talk.
Posted by Frances at 8:00 AM

It is funny because I knew that he was writing but I had no idea that he had become so well-known after his first book of short stories.Well, I was playing basketball with him down at JK and we got to talking about his writing and I said something like well that is great but what a hard field to get any published.I suggested that perhaps I could talk to Alex Gansa about some work that Ethan had done to help out.He was so sweet he hemmed and hawed for a bit and I continue to suggest that I could make some calls and finally he said well, Robin I am close friends with Alex and I have already received a 250,000 advance for my next book but thanks so much LOL
Robin Renfrew