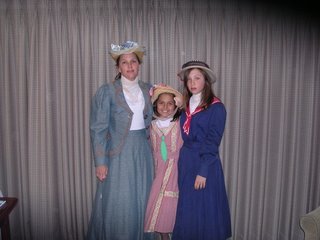 Well, when the alarm clock went off at 3:30 a.m. I started to second guess my decision to go to the 100 year commemoration of the 1906 San Francisco earthquake and fire. I really questioned my judgment when I found my husband doubled over, his stomach a knot of cramps. (A bad pina colada the night before, perhaps)

So instead of immediately getting into my costume, I ran out of the Hyatt Regency and across the street to a 7-11, where I bought him some Alka-Seltzer. The street in downtown San Francisco was empty save for a homeless man in a ragged raincoat who was pacing back and forth. His shoulders were hunched forward and he reminded me of one of the zombies in George Romero’s Day of the Dead.

After that, events went smoothly. I roused my two daughters out of bed and we put on our early 20th century outfits. My oldest daughter, Charlotte, had a blue sailor suit, and Juliet had a pink sailor dress. I had a blue coat, white shirtwaist, long blue skirt and a hat. The hardest part of getting dressed was putting on the corset, which had to be tightened and tied by someone else. (I won’t even go into details here on how I got it off). (See more pictures here.)

We set off for Lotta’s Fountain around 4 a.m. and soon came upon hawkers for the San Francisco Chronicle. The newspaper had printed a replica of the paper published the day after the earthquake with the headline “Earthquake and Fire: San Francisco in Ruins.” The reproduction was wrapped around the day’s newspaper and it added a nice historic note to the day.

The ceremony at Lotta’s Fountain went on so long that even the 100-year and more survivors complained about the cold. There were lots of speeches – perhaps four too many – but a precisely 5:12 a.m. Mayor Gavin Newsom called for a moment of silence in honor of those who lost their lives in the earthquake. A lone fireman clanged a silver bell and he was soon joined by the sound of sirens and church bells ringing around the city. That was the most somber moment of the morning.

Newsom then interviewed the dozen earthquake survivors. Ed didn’t like his act, complaining it became more about Newsom than about the survivors, but I enjoyed it. I hadn’t heard Newsom speak at any length before and found him personable and funny. Some of the survivors were downright hilarious, particularly the woman who was raised by prostitutes after the disaster. Her family’s apartment was above a brothel and her mother told her she could always count on an adult being available downstairs because they were always home.

The ceremony ended and we left to get breakfast. My kids and their sick father left for school and work and I stayed behind in the city. Somehow, walking up Market Street in my costume seemed much more peculiar in broad daylight. But when I got back to Lotta’s Fountain, complete strangers asked if they could have their photos taken with me! At that point the day became truly fun, as the parade of antique fire trucks and old cars passed by. Complete strangers started swapping earthquake stories about their ancestors. One protestor held a sign: “The 1906 Earthquake: Blame Bush!” I guess he summed up the feelings of the Bay Area.

After the parade, I went to the Mechanics’ Institute Library, the 150-yearold private library on Post Street, for a Ham and Egg Brunch and a lecture by former firefighter Dennis Smith. It was one of many literary touches to the day. Simon Winchester was scheduled to speak there at night, and Philip Fradkin, whose book The Great Earthquake and Firestorms of 1906 is up for a Los Angeles Book Award this weekend, also had numerous speaking engagements. Mark Klett and Rebecca Solnit spoke at Cody’s new San Francisco store at 7 a.m.

Smith’s book, San Francisco is Burning: The Untold Story of the 1906 Earthquake and Fire, focuses on the Fire Department and what they did to put out the blaze. Smith thinks the city had two pieces of bad luck that made the fire worse than it had to be: The Fire Chief, Dennis Sullivan, was severely injured in the quake itself, and his absence led to a power vacuum that was not successfully filled. The other problem was that General Frederick Funston was in charge of the Army because his superior was in Chicago. Funston went overboard with dynamiting the city’s building, actually contributing to the conflagration, according to Smith.

I had a chance to talk to Smith before his presentation. His book is part descriptive narrative, part explanatory narrative. I am trying to combine the two in my own book and he expounded to me about the power of the transitional paragraph. I listened; he has written 14 books, many of them bestsellers.

By 1:30 p.m. I could hardly breathe. A corset is best tolerated standing up. I left the celebration for home.

I’m off to New York for a week, so I won’t be posting for awhile.
Posted by Frances at 6:53 PM

You & the girls look like true San Franciscans. I've been enjoying your blog. Hope your house is staying secure through the slide season.